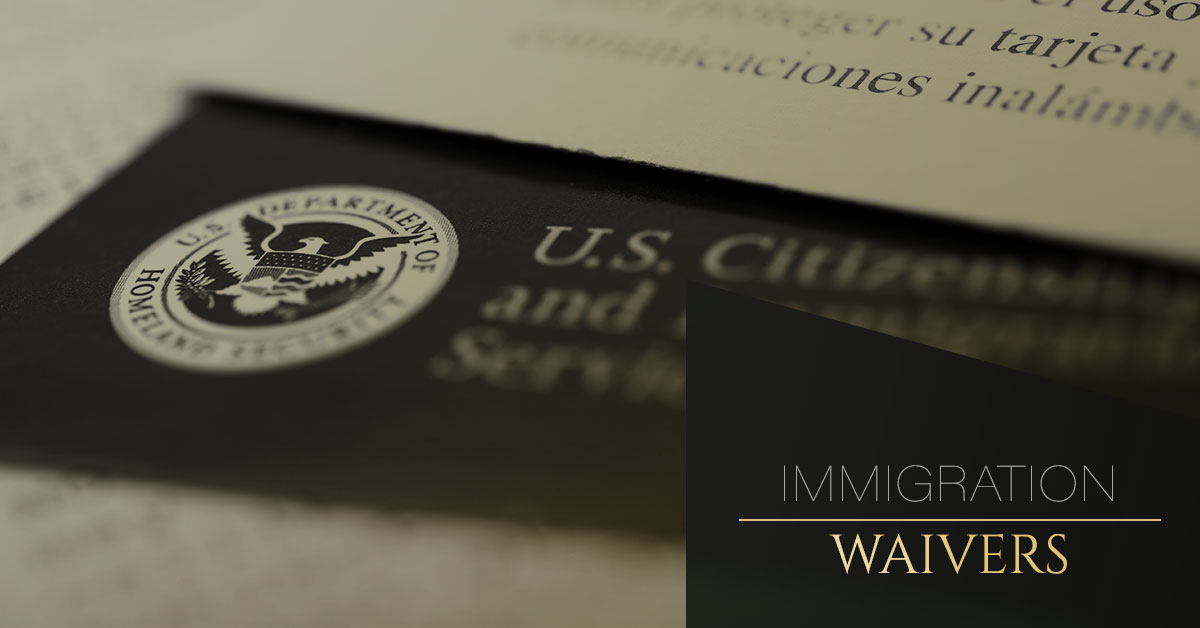 There is a book full of reasons why you may not be able to apply for or renew a visa or green card — violated an immigration law, deportation, expired visa, or you were charged with a crime — and many people fear that this means the hope of obtaining naturalization is all but gone. However, immigration waivers exist to help qualifying immigrants to have this decision overturned. An immigration waiver is a legal pardon that may allow you to apply for and be approved for a visa, green card, or naturalization. Join us in today’s post as we discuss some of the specific waivers that are available.

NATURALIZATION IS NEVER OUT OF THE QUESTION

As with anything in life, naturalization as a legal US citizen is governed by clearly defined laws. However, just like every other law, exceptions may be granted on a case-by-case basis. Here are some of the specific waivers that you may be eligible for if your request for a visa, green card, or naturalization has been denied.

If you have been in the United States illegally for more than 180 days, there is a three-year mandatory wait time before you can be considered for legal residency. And, if you have been illegally living in the United States for more than a year, there is a mandatory ten-year wait period. The waiver of unlawful presence can grant permission to override the mandatory wait time if you are a spouse or parent of a legal U.S. resident and your visa denial would cause a hardship to your family.

Being convicted of a crime can prevent you from being approved for obtaining a visa or citizenship, and depending on the severity of the crime may even result in current legal status being revoked and deportation. However, if you were convicted of a crime more than 15 years ago and can prove that you have not recommitted a crime and are not a threat to the safety and welfare of others, you may qualify for this waiver.

Waiver of crimes of moral turpitude

Crimes of moral turpitude (CMT) are those that challenge morality or those that are “inherently base, vile, depraved, or contrary to general morality.” Acts that have an evil intent or display a disregard for human life are considered crimes of moral turpitude and violate the “good moral character” that is required for citizenship. Examples of CMT include violent crimes such as murder, manslaughter, rape, abuse, incest, kidnapping, robbery, assault, mayhem, animal fighting, theft, and fraud, or the attempt of these crimes. If you have been convicted of any of these crimes and can prove either your innocence or that the crimes were not committed out of malice — for instance, unintentional manslaughter, or assault in self-defense — and you do not pose a threat to the safety and wellbeing of others, you may be granted a waiver.

Waiver of possession of marijuana

Waivers for nonimmigrants are available to foreigners who have been denied a visa, green card, or citizenship but wish to visit the United States. A waiver may be granted if they can provide a good reason for their visit and it will not be detrimental to the safety or welfare of U.S. citizens. These waivers are generally used to visit family members in the states and grant temporary legal entry to the United States.

If you are in the process of applying for a visa, green card, or naturalization, or you are already in the removal or deportation proceeding process, you need the expert consultation of an experienced immigration lawyer. At Zohar Law Firm, we have passionate immigration attorneys in New York who can help you with obtaining an immigration waiver. For all of your immigration legal service needs, contact us today!