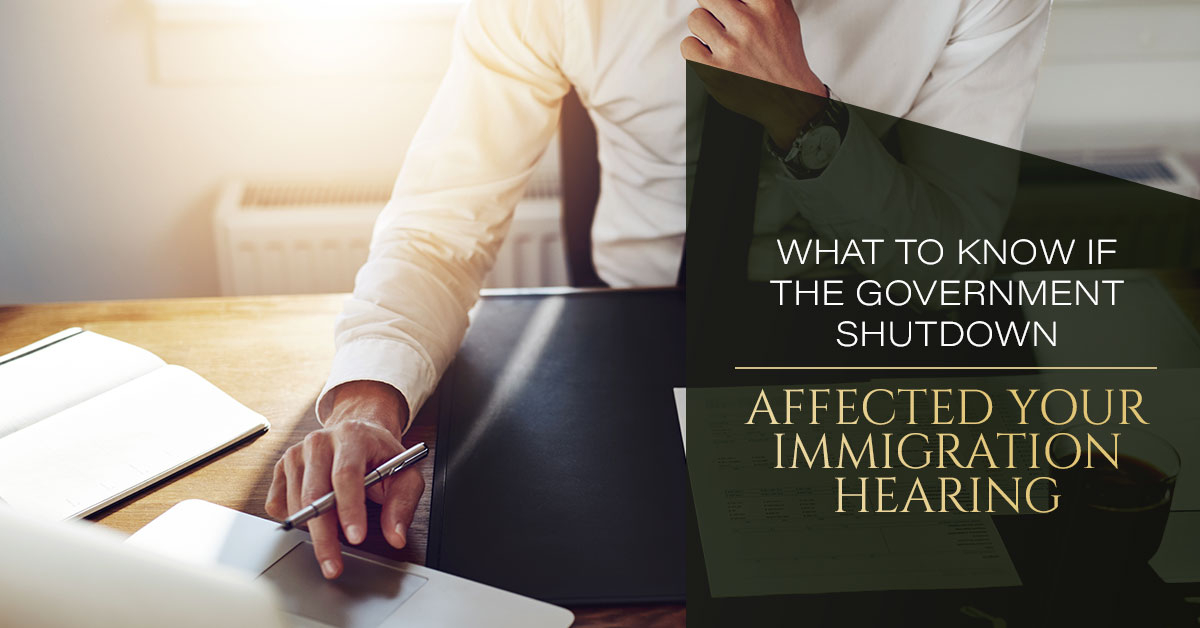 What to know if the Government Shutdown affected your immigration hearing

During the recent government shutdown, countless offices and services across the U.S. were adversely affected. While the thousands of furloughed employees will get their back pay, not every aspect of the shutdown is quite as simple to make up for. One of the biggest consequences of the government shutdown is also one that is going to take literal years to compensate for. A vast majority of immigration hearings that had originally been scheduled to take place during the 35-day window between December 22, 2018, and January 25, 2019, ended up getting canceled. If you or someone you love had their immigration case affected by the shutdown, here’s what you should know:

IMMIGRATION HEARINGS AND THE SHUTDOWN

At the end of November of last year, a backlog of over 800,000 active immigration cases had built up. Each of those canceled hearings represents another case that wasn’t processed, which means the backlog has continued to grow. Further, there wasn’t a good way to simply shift back immigration hearings when the shutdown ended. This means that any hearings that got canceled during the shutdown are effectively moving to the end of the list. For many, that means waiting an additional 2–3 years for a new court date. Since most applicants have already been waiting multiple years, it’s an incredibly frustrating scenario.

WHAT YOU CAN DO

Unfortunately, there isn’t really a way to move up your immigration hearing if it was canceled and rescheduled. Immigration courts are doing what they can to work with those who were affected, but their already-busy schedules mean there isn’t much in the way of wiggle room. As difficult as it may be, try not to worry. A canceled immigration hearing may be a blessing in disguise. While it does mean waiting longer for the new court date, the postponement also means more time to prepare.

Immigration judges have been more stringent about hearings during the current presidential administration, so that extra time can be invaluable. Use that time to gather additional evidence to help build a strong case for a claim of status. The more evidence you can provide, the better qualified you will appear. In addition, the delay of time means more time spent in the U.S. while you wait for the new hearing date. In some cases, this may occasionally open up new immigration statuses that you may not have been eligible for previously. It’s a great idea to work with an immigration lawyer — someone who knows the ins and outs of the U.S. immigration system — to help you prepare as thoroughly as possible.

A Word Of Warning

The additional time is a double-edged sword. In some cases, it means more time to prepare, which is a blessing. However, the alternative is that immigration policies may change. If that happens, some individuals who were previously eligible for immigration may no longer qualify under a particular visa. In these cases, it’s important to have a trusted immigration lawyer who can help navigate the changes.

The best thing you can do if your immigration hearing was canceled is to connect with an immigration lawyer. We keep abreast of the changes to immigration policy so we can better advise you about your individual case. If you’re in New York City or the surrounding areas, start by scheduling a consultation with the immigration law team at Zohar Law today.